Millions of animals are subjected to painful laboratory experiments in Canada every year, often without any pain relief. Animal experiments are done not only for biomedical research, but also for science, and chemical safety tests.

Shockingly, the federal government doesn’t regulate or oversee animal experimentation, leaving animals almost completely unprotected against mistreatment. Instead, Canada largely lets animal experimenters make up their own rules. Canada relies on the Canadian Council on Animal Care (CCAC)—a non-profit organization with no legal authority, which is dominated by animal experimenters. The CCAC creates voluntary standards for animal treatment inside labs, and it inspects labs only once every three to five years in pre-announced visits—giving labs plenty of time to cover up poor conditions. Participation isn’t legally-required for labs, and many private labs that don’t rely on government funding do not participate.

The CCAC is not a law enforcement agency, so it cannot take legal action against a lab for failing to meet those weak, voluntary standards. Even in cases of egregious animal abuse, all that the CCAC can do is recommend that government science funding bodies refuse to give further public funding to a lab.

Canada urgently needs national regulation and oversight of laboratories, with regular, unannounced inspections, and inspection reports that are available for the public to scrutinize. There must also be national coordination to ensure no duplicate experiments are conducted, and that animal-free research methods are required anytime they exist.

The government doesn’t collect statistics about animal research in Canada, but in 2020, the CCAC reported that over 5 million animals were used in labs that it oversaw. This isn’t the full picture, because private labs have no legal obligation to report. Mice, birds, and fish are the most-used animals, but no species is safe—tens of thousands of animals like dogs, cats, and primates are also used each year.

Using animals to test the toxicity of chemical ingredients is outdated and cruel, yet is still commonplace in Canada. These tests range from skin and eye irritation tests, to so-called “lethal dose” poisoning tests, where animals are forced to ingest chemicals until half of the animals in the testing group die. These are complex, sentient animals who can think and feel pain, yet many are painfully poisoned to death to bring new cosmetics or household cleaners to market.

Almost 40 countries around the world—including the largest global market for cosmetic products, the European Union—have already banned using animals for cosmetic tests, and rightly so. Testing these products on animals is not only inhumane, it is also unnecessary. Thousands of approved ingredients are already documented as safe for human use, and scientific innovation has led to the development of more modern, often cheaper and more efficient methods for testing new ingredients without the use of animals.

In 2019, Canada came frustratingly close to banning cosmetic animal testing. With Animal Justice’s support, a senate bill would have outlawed this cruel and outdated practice. Sadly, the bill ran out of time and didn’t pass before the 2019 federal election. It’s disappointing that this bill did not become law despite enjoying the support of the government and the vast majority of Canadians. The federal government should move swiftly to enact long-overdue legislation to protect animals from needless, barbaric cosmetic testing.

Testing on animals for medical research can be an emotional and hotly debated topic. But the truth is, that animal models testing pharmaceutical products and medical treatments are often unreliable, and fail to translate into humans. The reason for this is simple—humans and non-human animals often have very different physiologies, and what works in an animal usually does not work in a human. Animal models of diseases simply cannot replicate the complexity of human bodies, which is why 95 percent of drugs that pass through animal models fail at the clinical human trial stage.

The good news is that science is evolving and making humane, animal-free tests more readily available each year. The We Animals Media short-film, Gold Standard Turned to Rust, provides a good overview of this issue. And in 2017, the Canadian Centre for Alternatives to Animal Methods opened at the University of Windsor, aiming to develop animal-free, human biology-based alternatives to replace the use of animals in biomedical research, education, and chemical safety testing.

In 2021, the federal government announced a commitment to reducing toxicity testing on animals, and support the development of alternatives to animal testing.

We must do better by these animals. Safer modern technologies exist, and these are the future of medical research. Canada can avoid lagging behind the rest of the world, scientifically and ethically, by moving towards ending all animal experimentation as soon as possible. 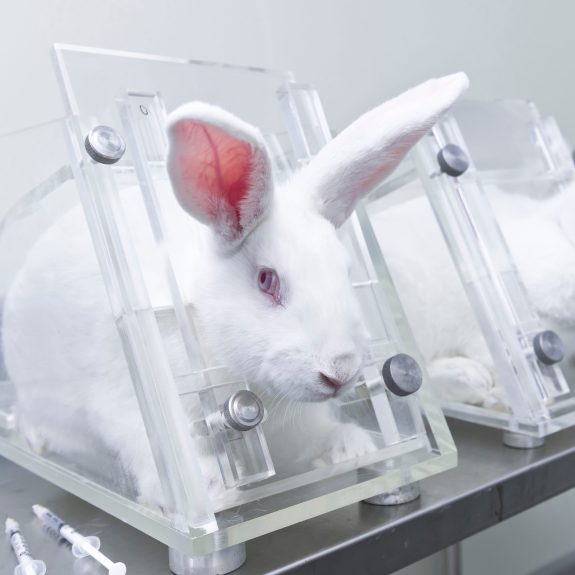 New Bill Could Phase Out Toxicity Tests on Animals in Canada