Animal Justice to Continue the Fight Against Bill 156 in Court

“Whistle-blowers have been champions of truth and justice across our province, our country and this world. They have a role which has upheld democracy, which has spoken truth to power, which has brought justice to those who are oppressed, which has helped people in need. If the government, having known the threat to this right that this bill puts forward, continues to choose to push, to ram, this piece of legislation forward, then the ultimate result will be injustice. The ultimate result will be a province which is not lifted up. It won’t be a province in which the people you purport to support will ultimately enjoy greater freedoms or protections. If anything, you’re going to collectively hurt us all.”

On June 17, 2020, Ontario passed Bill 156, dangerous legislation that will cover up animal cruelty in the meat industry—making it a dark day for farmed animals in Ontario, as well as for human rights. The government rammed the bill through during the COVID-19 pandemic state of emergency, despite alarm bells from constitutional and criminal law experts, and warnings that reducing transparency at farms and slaughterhouses is bad for animals, workers, the environment, and public health.

But the debates in the legislature over Bill 156 were full of misleading statements from government MPPs about its impact, including claims that its purpose is only to protect farmers and business owners from trespassers. During legislative hearings on Bill 156, some industries pushed the government to go even further, by restricting rights to protest on public property near horse carriage rides, or to interact with animals such as sheep grazing on public lands. In its written submissions to the General Government Committee, lobby group the Ontario Federation of Agriculture even claimed that farmed animals can’t think or feel.

All government and Liberal MPPs present voted in favour of this dangerous law, but New Democratic Party MPPs and the Green Party MPP did vote against it and spoke out during debates about how the bill violates constitutional rights to freedom of expression, and pointed out the lack of legal protections for farmed animals in Ontario.

Although Bill 156 has passed, it is not yet in effect. The government first plans to draft regulations to accompany the new law, and this may take several months. Several aspects of Bill 156 are likely unconstitutional, and the regulations will set out further detail about what types of conduct are and are not caught by the new law and what the effect of those restrictions will be on individuals’ Charter-protected rights to freedom of expression and freedom of assembly. Where the law runs afoul of the Charter, Animal Justice will take it to court.

Courts across the United States have already struck down similar ag gag laws on the basis that they violate the First Amendment right to free speech. For instance, North Carolina’s ag gag law was struck down last month, with the court finding that the government’s stated objectives—protecting property and increasing trespass fines—were unfounded and did not justify the law’s sweeping restrictions on free speech by shutting down whistleblower exposés on farms.

The COVID-19 pandemic shows we need more oversight and transparency of our food system, not less

With no legally binding standards of care for farmed animals and no proactive public inspections to monitor the condition of animals confined on farms, employee whistleblowers are essential.

By making it an offence to enter a farm or slaughterhouse under “false pretenses”, ag gag laws such as Bill 156 are aimed at stopping the types of whistleblower exposés that have exposed horrific cruelty to animals, including cows, turkeys, pigs, piglets, goats, mink, calves, and chickens at farms and slaughterhouses across Canada. Ag gag laws do this by punishing individuals who work at these facilities without disclosing that they are an investigative journalist or are affiliated with an animal protection group.

What has received less attention is the fact that Bill 156 could also be used to prohibit employees from entering a factory farm or slaughterhouse in order to expose poor working conditions or risks to public health. Indeed, the history of whistleblowers in the meat industry can be traced back to Upton Sinclair who published his seminal novel The Jungle more than a century ago, after investigating and observing day-to-day operations in the Chicago meatpacking industry.  The novel exposed labour and health violations in the meatpacking industry, including descriptions of diseased, rotten, and contaminated meat. The Jungle shocked the public and led to the enactment of federal food safety laws in the United States.

As the Globe and Mail and others have documented, thousands of workers at slaughterhouses and meat processing plants have fallen ill with COVID-19 due to poor working conditions and a lack of personal protective equipment in their workplaces. Bill 156 could prohibit employees from speaking out about poor working conditions, or from documenting and publicly exposing inadequate physical distancing or access to personal protective equipment in the workplace.

Furthermore, infectious disease experts such as Dr. Jan Hajek, who spoke during hearings on Bill 156, have warned that filthy conditions at factory farms could be the source of future zoonotic diseases that jump the species barrier to humans, just as they have been the source of deadly strains of bird and pig flu in the past. Ontario’s move to provide less oversight and transparency over the meat industry despite known risks to public health is shockingly irresponsible.

Even though the Security from Trespass and Protecting Food Safety Act, 2020 is not yet in force, animal advocates worry that it is already emboldening the meat industry and has increased tensions between advocates and the owners of farms and slaughterhouses, as well as transport truck drivers.

Speaking out against the Bill, including in particular the provisions granting powers of arrest to farmers, the NDP’s Agriculture Critic, MPP John Vanthoff, decried the safety risks posed by Bill 156: “…people are going to get hurt because of this…when someone’s badly hurt or killed it’s going to be an issue here again, and it’s going to be a much bigger issue for that family.”  Notably, the new law limits the liability of transport truck drivers such that they will only be liable for injuries caused to protestors who “interact” with farmed animals in transport trucks if they intentionally cause harm or act with “reckless disregard” for the presence of the person.

Tragically, two days after Bill 156 was passed, Regan Russell, a kind and longtime animal and human rights advocate was violently killed while peacefully protesting on public property in front of Fearmans Pork slaughterhouse in Burlington, Ontario. Regan was run over by a truck transporting pigs to slaughter. She had regularly participated in vigils outside of the Fearman’s pig slaughterhouse, and was there that day in protest of Bill 156, and to show compassion to pigs in the final moments of their lives before doing so becomes an offence in Ontario.

Rather than restricting Charter-protected rights to peaceful protest and free expression and increasing tension between animal advocates and those in the meat industry, the government should respect constitutional rights, and increase transparency in the animal farming industry.

Once Bill 156 comes into force, Animal Justice will go to court to ensure individuals’ basic constitutional rights are upheld. Legal challenges are costly and lengthy, but we believe it’s essential to challenge unconstitutional laws that restrict animal advocacy. There is far too much at stake for animals, workers, the environment, and human health to let the law go unchallenged. 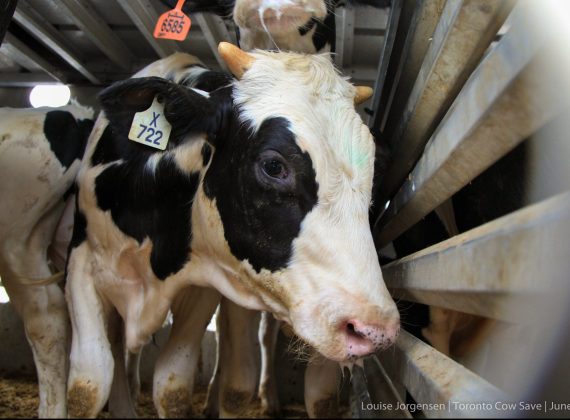