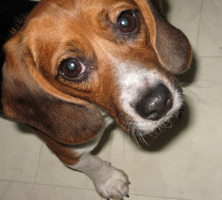 A student at the Ontario Veterinary College contacted Animal Justice Canada when informed that she would not be permitted to graduate and become an Ontario veterinarian unless she killed a healthy dog after a routine spaying.

The school reversed its position and accommodated the student when Animal Justice offered its assistance and informed the student of her Ontario Human Rights Code right to have her deeply held beliefs regarding the sanctity of life accommodated.

The student’s brave stand saved Rainbow’s life, set a precedent for other students to follow, and inspired Animal Justice to launch its Student Conscientious Objectors campaign which informs other students of their right to refuse to harm animals in the course of their studies.

After the surgery, Rainbow was adopted by a loving family and is now happy and healthy in her forever home.

The University of Guelph has since stated that it will change its policy on killing dogs and states that such a practice is no longer a requirement. The Canadian Broadcasting Corporation covered the story and the video can be watched at this link: http://www.cbc.ca/video/#/News/ID=1555198432