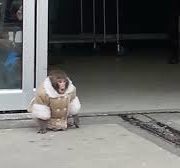 TORONTO – Yasmin Nakhuda, former owner of Darwin the Ikea monkey, has reportedly acquired two new Japanese macaque monkeys. Darwin, a baby Japanese macaque, was rescued by Toronto Animal Services and rehomed to the Story Book Farm Primate Sanctuary after he was found loose in an Ikea store parking lot in 2012. Nakhuda lost a lawsuit that sought to have Darwin returned to her.

Although Toronto bylaws prohibit owning primates, Nakhuda now reportedly lives in the Kawartha region, which does not have bylaws against owning monkeys.

“Ontario urgently needs consistent, province-wide laws for the keeping and sale of exotic pets,” said Camille Labchuk, director of legal advocacy for Animal Justice Canada Legislative Fund. “Municipalities have been forced to pick up the slack, and the result is an inconsistent patchwork of bylaws that allows private pet collectors to keep primates and other dangerous animals in many areas. Consistent, province-wide rules are the only way to protect public safety and animal welfare.”

Veterinary evidence strongly suggests that primates do not make suitable pets. Yet in many municipalities in Ontario, dangerous animals like primates, large cats, and large snakes and other reptiles can be legally kept without a license, and with virtually no oversight. Private pet collections and roadside zoos are the tragic result.