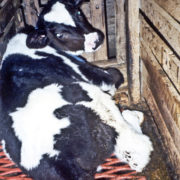 TORONTO — After an activist wired with a hidden camera documented animal abuse and neglect at a veal farm in Pont-Rouge, Quebec, provincial law enforcement today filed two animal cruelty charges against Éric Dame, a former employee of the facility who was caught on tape shoving, kicking, and screaming at calves.

Animal Justice Canada Legislative Fund, Canada’s only animal law-focused organization, applauds these groundbreaking charges and hopes they send a clear message to politicians that the time is now to update our shamefully inadequate animal protection laws.

“Our weak laws are a breeding ground for animal abuse,” said Anna Pippus, director of farmed animal advocacy for Animal Justice. “Across the country, animals are languishing on factory farms with virtually no governmental oversight. Shockingly, the few animal protection laws that do exist are not proactively enforced by law enforcement, which waits for complaints from the public before acting to protect farmed animals. These complaints are virtually non-existent in respect of farmed animals, because the abuse and neglect is hidden away from public view. Moreover, the laws are too vague and meagre to adequately standardize farm conditions and treatment of animals, leaving the industry to police itself. Poll after poll show that the Canadian public has no appetite for animal abuse. The time is now for politicians to act to strengthen laws to protect farmed animals and bring more transparency to our food system.”