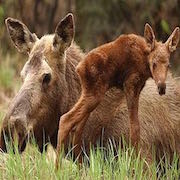 TORONTO – Animal Justice Canada (“Animal Justice”) has submitted to the Ontario Ministry of Natural Resources and Forestry (“MNRF”) that moose calf hunting should cease entirely in the province of Ontario to respond to the crisis of the moose population decline.

“Hunting moose calves is contributing to a disturbing, 15-year decline in Ontario moose populations,” said Camille Labchuk, director of legal advocacy for Animal Justice. “Reducing the moose calf kill period to two weeks won’t save the moose population, as the government’s own statistics show that moose hunters already only kill moose calves for two weeks or less of the open season. Reducing the kill season has been tried and failed in the past. We urgently need a moose calf hunting moratorium now.”

Animal Justice’s position is in line with the MNRF’s objectives, as stated in its Moose Management Policy, which include managing moose populations sustainably.

Animal Justice recommends that, given the steady decline of the moose population in the last 15 years, it is appropriate to discontinue the calf moose hunt until moose numbers have stabilized. Shortening and delaying the hunting season, the two tactics the MNRF offers as a remedy, has not worked in the past to revive the moose population. Rather, ceasing moose calf hunting entirely would better allow infant moose to live long enough to contribute to Ontario’s ecosystems and help moose populations rebound.

The MNRF has asked Ontarians to participate in the planning and decision-making in moose management by providing feedback on the proposals. The public can find out more and submit comments here: http://apps.mnr.gov.on.ca/apps/dashboard/ontarios-moose-project.

Animal Justice Canada is a charity dedicated to advancing public knowledge of animal practices and preventing the abuse and killing of animals through the enforcement of existing laws. Visit www.animaljustice.ca to learn more.