TORONTO—National animal law organization Animal Justice Canada has launched the largest-ever series of Canadian animal protection billboards, with 68 billboards in Toronto and Vancouver measuring 10 by 20 feet each. The billboards are expected to garner 52 million views over their month-long run.

Unlike other campaigns focusing on a single issue, the Animal Justice Canada billboards highlight the pervasive suffering caused to animals in Canada by the four major animal-use industries: food, fashion, experiments, and entertainment. 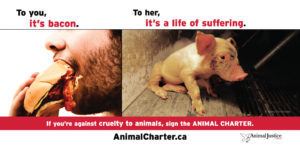 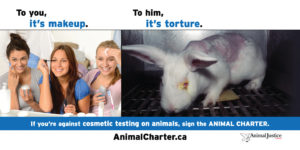 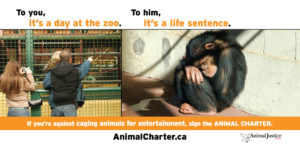 The billboards show how Canadians—who overwhelmingly support animal protections—can nonetheless cause heartbreaking animal suffering through everyday choices. In one ad, a fashionista sporting a Canada Goose-style fur-trimmed jacket is juxtaposed against a terrified coyote caught in a leg-hold trap where she could be in agony for days before being killed. Another ad tackles the recent bacon fad by contrasting it with the misery of a tiny piglet starting her on a factory farm. A third ad features teenagers applying makeup next to a rabbit devastated by toxicity tests—geared to create momentum for the new Senate bill to ban cosmetic testing in Canada. A fourth ad asks if a trip to the zoo is worth a monkey being kept caged, alone, and miserable for his entire life.

The billboards call on the public to help improve life for animals by signing the Animal Charter of Rights and Freedoms—to rally policymakers to give animals appropriate legal rights, and give them standing to have those rights enforced in court.

“The response from the public has been overwhelming,” said Camille Labchuk, executive director of the Animal Justice Canada Legislative Fund. “It’s 2016, and the time is right for a legal revolution in the way Canada treats animals. Canadians care about animals and want them to be protected from suffering, abuse, and neglect; it’s time for our legal system to catch up to our values.”

Attention paid to animal protection issues has exploded recently, including momentum around Senate bills that would ban cetacean captivity across the country and ban cosmetic testing on animals, and international uproar over the brutal killing of Cecil the Lion. The billboards seek to translate this momentum into legal changes for animals.

-30-
For more information on the billboard campaign, please visit www.AnimalCharter.ca

For a map of Toronto billboard locations, click here.

For a map of Vancouver billboard locations, click here.