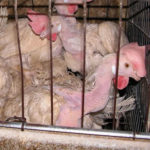 “While the Animal Welfare Act is more comprehensive in many respects than the current laws and increases current penalties, it is still riddled with loopholes, and creates new barriers to protecting animals,” says Camille Labchuk, director of legal advocacy for Animal Justice. “Currently PEI is a national leader in incorporating codes of practice as standards that must be followed in caring for animals, but this new legislation would gut that requirement. While other provinces like Quebec and New Brunswick are getting serious about animal protection, the Animal Welfare Act is a step in the wrong direction.”

“The proposed definition of animal ‘distress’ is too high a bar, and will make it more difficult for inspectors to seize suffering animals and for prosecutors to convict abusers. The bill contains sweeping exemptions for many industrial uses of animals, and much of the language remains vague, making it potentially difficult to enforce.”

“Further, it does little to address the conditions that allow puppy mills to flourish. It also fails to address many cruel practices already being banned in other provinces, such as tethering, hoarding, and abandonment.

“Instead of relying on complaints from the public, law enforcement should be empowered to conduct unannounced inspections at animal establishments so that inspectors can be proactive in dealing with hidden animal abuse and neglect.”

Animal Justice will provide a full submission to the committee studying the bill, including proposed amendments:

The proposed statute has been five years in the making. It is the result of the Department of Agriculture and Forestry’s (now Agriculture and Fisheries) commitment to improve its internal procedures and overhaul animal welfare legislation following the conviction of Bud Wheatley in 2010 in relation to the operation of a well known puppy mill in PEI. During sentencing, Judge Nancy Orr described the situation as incredible, and expressed her concern that inspectors had allowed animals to live in such appalling conditions for so long.