Polls consistently show that most people are opposed to using animals for entertainment at places like zoos, aquariums, and rodeos. The good news is that Canada is making slow progress toward protecting some animals from a lifetime of misery in the entertainment industry. Many municipalities have passed bans on the use of animals in circuses and zoos, on horse-drawn carriages, rodeos, and other uses of exotic animals. In a landmark victory for animals, Canada passed a groundbreaking federal ban on keeping and breeding whales and dolphins in captivity in 2019, after a long campaign by Animal Justice and other animal protection advocates. This new law is strong recognition that these smart, sensitive animals deserve freedom—not a lifetime in a tiny tank.

Zoos and aquariums condemn animals to a lifetime behind bars, often in isolation or social groups that are unsuited to them, and in cages which can never simulate their natural habitats or climates. Lucy, an Asian elephant, has been held at northerly Edmonton Valley Zoo for more than forty years, including two decades in isolation, despite multiple campaigns to have her moved to a sanctuary in a warmer climate with other elephants.

Zoos and aquariums often claim they play a key role in education and conservation, but the reality is that they exist primarily to exploit animals for human entertainment. Most zoos don’t have meaningful conservation programs which reintroduce animals into the wild, and only a tiny fraction of zoo profits are invested in educational programs. There is also no evidence that zoo education programs inspire behavioural or policy changes, or better outcomes for wild animals.

Zoos in Canada are poorly regulated. As the largest province, Ontario has become the roadside zoo capital of the country. Ontario does not even license or regulate zoos, meaning that anyone can open a for-profit facility that confines dangerous, exotic animals with practically no rules or oversight. Zoos in Ontario and many other provinces aren’t subject to mandatory inspections. This lax oversight model allows animals to suffer in cramped, inadequate conditions. But it also threatens public safety. In 2016, a lion named Zeus was shot and killed by zoo staff at Papanack Zoo, a roadside zoo near Ottawa, after escaping from his enclosure.

Conditions inside Canadian zoos are clearly inadequate. Animal Justice released hidden-camera footage from Panapack Zoo in 2017, revealing shocking conditions and mistreatment of animals, including an employee admitting to beating a lion cub, baby animals separated from their mothers so they can be used for money-making selfies, and animals performing repetitive behaviours—a sign of psychological distress. In Quebec, a zoo owner was charged with animal cruelty and neglect in 2019 after an investigation led by the Montreal SPCA. This was the first time in Canada that a zoo owner had faced criminal animal abuse charges. The zoo was later ordered closed due to unsafe working conditions for its staff.

It’s time to reimagine zoos, and convert them to animal sanctuaries to offer a real chance at an enjoyable life to captive animals who cannot be released into the wild. By putting the animals’ needs first, sanctuaries offer refuge to animals, and a chance for the public to learn about their sentience, individuality, and true needs.

Rodeos have also come under fire in Canada for cruel events such as calf roping, bull riding, bucking bronco events, and chuckwagon racing. Rodeo events deliberately cause severe distress and pain for the terrified animals forced to perform in them, consistently resulting in injury and death. Over 60 horses have died since 1986 in chuckwagon racing events at the Calgary Stampede. Bulls are deliberately antagonized before being ridden, and horses used in riding challenges have painful flank straps tightened around their hindquarters to induce them to buck. Animal Justice believes that abusive rodeo events violate animal protection laws. Intentionally causing stress and harm to animals for frivolous entertainment purposes should be outlawed for good. 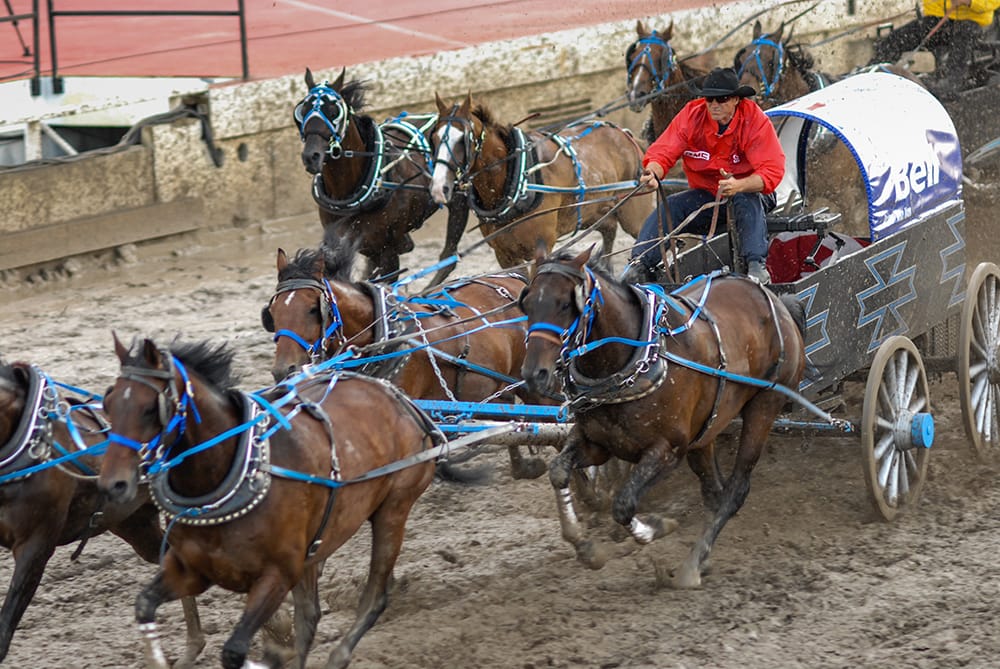