There are approximately 35 zoos in Canada, not including aquariums. Within these zoos, there are several different species of wild animals, not native to Canadian climate, living in captivity. There are several arguments commonly used to support the continued existence of zoos, including, but not limited to, amusement, education, research, and preserving endangered species. However, keeping wild animals in captivity means taking an animal away from its native habitat (1). Many animals are native to habitats with sunny weather and high temperatures year round, which when brought into captivity may be forced to spend their lives, year round, in North American Zoos. Canada, in particular, experiences a prolonged winter where the temperature is uninhabitable for animals not suited to its climate. This blog entry will focus on elephants in Canadian zoos and recent changes affecting their wellbeing.

Elephants are the largest of all land animals, adult males can weigh between 4,000 and 14,000 pounds and females can weigh between 6,000 and 8,000 pounds (2). Elephants living in an enclosure, where they are unable to live a life reflecting anything closet to normal, simply for the entertainment of the public is absurd. Wild animals in captivity should not be a weekend activity for the amusement of city dwellers. Entertainment, education, and research can be achieved without the confinement of wild animals in unnatural habitats, and preserving endangered species can be accomplished in appropriate sanctuaries.

Despite being provided with veterinary care and the attention of professional keepers, elephants in zoos routinely deal with problematic health issues, both mental and physical. Several health issues are caused specifically from a life of captivity, such as: obesity; arthritis; foot infections (the leading cause of death among captive elephants); reproduction problems; psychological disorders; early mortality; low fertility; and, engagement in a wide variety of abnormal behaviours, such as stereotypic swaying, killing of infants, and aggression toward other elephants (3).

All elephants require space, socialization, family, entertainment, and the freedom to enjoy their life. Wild elephants spend their days roaming large distances; their home terrain can be several hundred, or several thousand, square kilometres (4). Elephants are social animals and it is normal for an elephant to live in a large herd where security and comfort are guaranteed, socialization and resource sharing are part of daily life, and knowledge and experience can be shared with other members of the family. Elephants spend the majority of their days moving around and foraging for food. Most elephants are active up to 18-20 hours every day, keeping them fit, healthy, and happy. Elephants require an expansive amount of space in order to maintain their health. Their constant activity and movement exercises joints and ligaments, maintains muscle tone, burns fat, and ensures good blood flow (5). 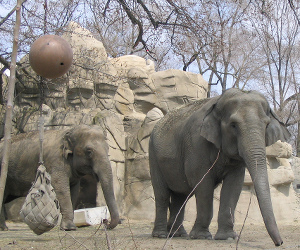 Elephants and their “toys,” meant to entertain and challenge them mentally.

Captive elephants do not have access to this kind of space, and live in a fundamentally foreign habitat. When it is cold outside, as it is for several months of the year in Canada, elephants are confined to an even smaller area. Elephants have evolved to live in temperate and tropical climates, and are at risk if subjected to consistently cold temperatures, because, once chilled, they are unable to gain sufficient heat to warm themselves, particularly their extremities (6). Cold climates, tight enclosures, and little exercise allow for a very different life than one in the vast, hot expanses of the elephants’ natural environments.

To date, 25 Canadian zoos have closed their elephant exhibits. Reasons range from lack of funding for exhibit expansions to welfare concerns, including, but not limited to, inadequate space, unsuitably cold climates, and insufficient social groups (7).

In May 2014, Calgary Zoo’s three female elephants arrived safety at their new home in Washington, D.C (8).

Currently, there remain only 4 Canadian zoos with elephants, these are: African Lion Safari in Ontario; Edmonton Valley Zoo in Alberta; and Granby Zoo and Parc Safari in Quebec.

One of the most famous elephants in Canada is Lucy, a 39-year old female Asian Elephant, and a resident of Valley Zoo in Edmonton, Alberta. Lucy demonstrates many of the health issues that elephants in zoos and confined areas suffer. Lucy’s health problems reportedly include chronic respiratory problems, arthritis, foot disorders, and obesity, caused or aggravated by her living conditions at the Zoo (9).

In August 2011, the animal rights groups, Zoocheck Canada and People for the Ethical Treatment of Animals (PETA), sought to have the 2010 decision overturned. Unfortunately for Lucy, the majority of Alberta’s Court of Appeal agreed with the chambers judge that these proceedings were an abuse of process. Alberta’s Chief Justice Fraser, however, dissented strongly from the majority’s decision (11).

Although this appeal did not deal with animal rights or the propriety of Lucy’s care, Chief Justice Fraser’s dissent not only addressed the important issue of standing (who has the right to commence a legal proceeding or to make arguments at a legal proceeding) but also emphasized that this case is not merely about civil procedure. The Chief Justice concluded that the case should go to trial on the important points of substantive law that potentially impact both the protection of animals in Alberta and the public interest in Edmonton’s compliance with the law (12). The Chief Justice stressed that the case is about an alleged sustained pattern of conduct over time in the city’s treatment of Lucy, and the alleged serious consequences of that conduct, contrary to what the law requires and the alleged serious consequences of that conduct. The evidence presented by the animal rights groups showed the magnitude of Lucy’s ongoing health problems and the severity of the suffering she continues to endure (13). The dissent draws attention to the fact that Lucy’s case raises serious issues, not only about how society treats sentient animals, but also about the right of the people in a democracy to ensure that the government itself is not above the law (14).

[To read a previous blog post about the decision in Reece v. Edmonton (City), and to find out more about Lucy’s case, go to: https://animaljustice.ca/blog/reece-v-edmonton-legal-standing-in-animal-protection/].

Although, recently, some elephants have been moved to sanctuaries where they have more space and a better climate, elephants and other animals still remain in Canadian zoos. These animals are forced to endure long winters, lonely days, minimal exercise and inadequate living spaces. These are all forms of mental and physical abuse. Lucy, other elephants, and several other species continue to live in zoos where, even if they are treated well, are still living in conditions that do not allow for the freedom, stimulation, socialization and exercise that they have evolved to require. Simply because the court did not grant standing to animal rights groups in Lucy’s case, does not mean that Lucy, or any other animal, should have to endure a life in captivity where their basic needs for a happy life are not being met. Hopefully public sentiment and reason will bring the City of Edmonton, and other Canadian authorities, to act in the best interest of the animals rather than continue to exploit them for entertainment value.

How Animals Are Often Robbed of Motherhood
MORE »