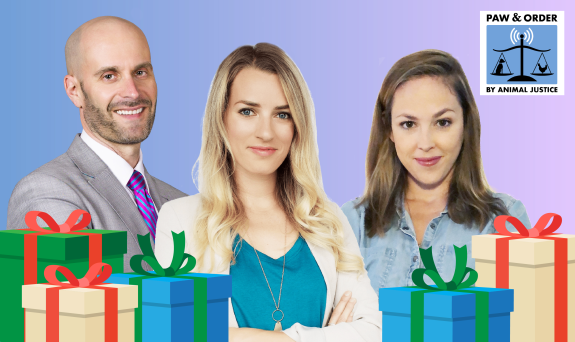 Welcome to the Paw & Order holiday spectacular—featuring all three hosts, Camille Labchuk, Peter Sankoff, and Jessica Scott-Reid! In this special holiday episode, the hosts give out 12 “gifts” to worthy people, groups and animals. This is one of our funnest and most energetic episodes yet!

December 20, 2019 Welcome to the first-ever Paw & Order holiday special! Hosts Peter and Camille get into Santa mode in this episode, giving out animal law-themed “gifts” to people, […]

Hosts Peter and Camille catch up on the Canadian Animal Law Conference, Animal Justice’s recent court cases, and what the federal election results mean for animals. For our main segment, you’ll enjoy listening to an interview with Professor Jodi Lazare of

The main topic is the tragic new British Columbia case of R v Santics, which dealt with a dog named Punky who was sentenced to death after Vancouver city enforcement officials decided he was a dangerous dog. Tragically, the B.C. Court of Appeal upheld a decision to kill Punky, and said the future courts no longer have the ability to impose interim measures for so-called dangerous dogs like muzzling, tethering, and training. Now, if a dog is determined to be dangerous, the judge has no choice but to impose a death sentence. Camille & Peter discuss why this case is terrible for dogs, and why dog legislation in Canada needs a major overhaul.

#37: Learning From the Past, Looking to the Future With the Canadian Animal Law Conference

In Episode 37 of Paw & Order, Camille and Peter catch up on the six horse deaths in Calgary Stampede chuckwagon races (get ready for a lengthy discussion of whether rodeo events are illegal), a great column on why the Stampede needs to ditch animal events, golf course staff running down Canada geese with a golf cart in Edmonton, the fur industry’s paid protesters in California, and the CFIA’s effort to quash a lawsuit about cruel horse transport practices. Camille also sits down with law professor Jodi Lazare of the Schulich School of Law at Dalhousie University, for chat about the upcoming Canadian Animal Law Conference and its stellar line-up of speakers.

This episode features an interview with marine law expert professor Cameron Jeffries, who helps us understand what it means that Japan has withdrawn from the International Whaling Commission and plans to overtly resume killing whales for the commercial meat market.

January 25, 2019   It’s Paw & Order’s one-year anniversary! Thanks to our listeners for an amazing first year. As we promised, this episode features an interview with marine law […]

Hosts Peter Sankoff and Camille Labchuk dive right into analyzing the brand new judgment in Bogaerts v Attorney General of Ontario, which found that the Ontario SPCA’s law enforcement powers are unconstitutional. Find out what this stunning decision means for the future of animal law enforcement in Ontario, and why Animal Justice is pleased with the outcome.

Peter Sankoff sits down with Chris Green, executive director of the Animal Law & Policy Program at Harvard University. Established in 2015, the program gives students and scholars the skills they need to analyze and improve the treatment of animals in the legal system. Chris fills us in on the work Harvard is doing to advance animal law, and some of the incredible achievements of program graduates.